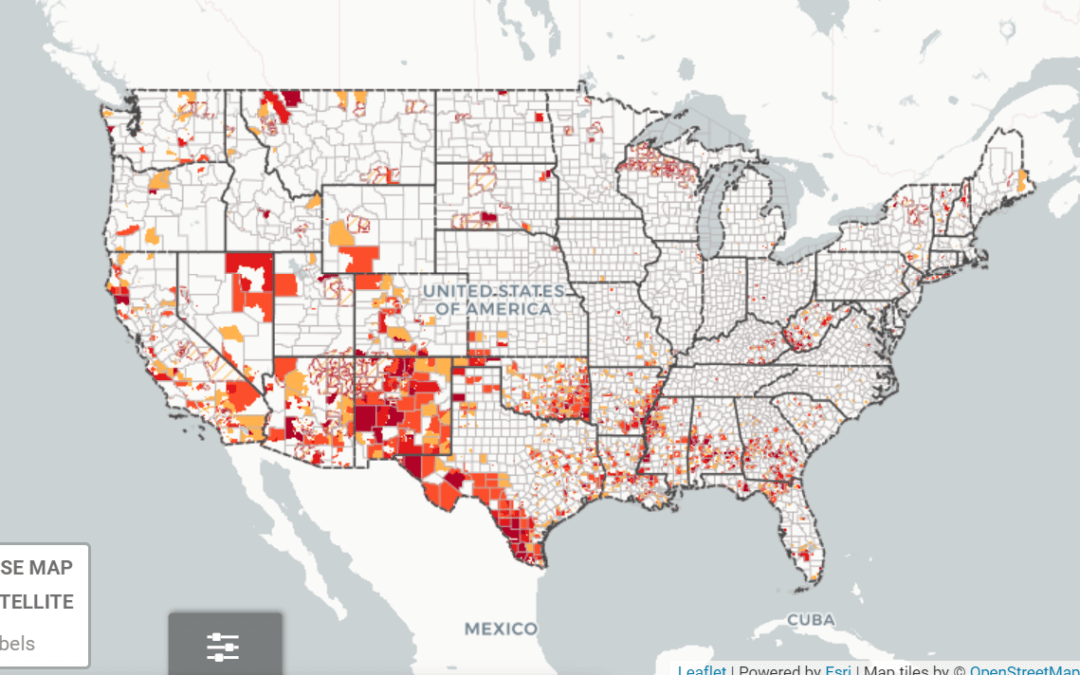 Here are the latest updates to the HTC 2020 map to help you plan your Get Out the Count campaigns:

Recently the Census Bureau published new data indicating which parts of the country will be included in each “Type of Enumeration Area” (TEA) for the 2020 Census; in other words, which households will be receiving either mailed instructions or hand-delivered instructions, or will be enumerated in-person. The updated data includes statistics by tract, county, and state of the share of households in each TEA. We’ve added this info to the HTC 2020 map so census stakeholders can use this information to inform their outreach. (This updates the original TEA designations that we mapped in March 2019).

The update reflects changes in areas such as Paradise, CA that were impacted by wildfires in 2018. In the map image below, the areas highlighted in purple on the map are where Paradise households that previously would have received 2020 Census instructions by mail will now have these instructions hand-delivered. Hand-delivery not only helps ensure that residents who have been displaced or are living in temporary housing will receive census instructions, but it also enables census staff to update the Bureau’s address list. Areas in yellow below already were slated to receive instructions by hand instead of mail. (Click the image to view the interactive map.)

It’s important to emphasize that the TEA designations have not changed for areas affected by recent natural disasters, despite statements indicating otherwise. In May 2019, NPR published a report quoting the Census Bureau that “If other natural disasters occur prior to the 2020 Census, we will make appropriate adjustments to our operations to ensure we cover any affected areas.” Several natural disasters have occurred since then, such as Hurricane Dorian, Tropical Storm Imelda (impacting a dozen or so counties in Texas), tornadoes in several states (such as Alabama and Ohio as well as Kansas and Oklahoma), and “the Great Flood of 2019” as the New York Times reported.

But the latest TEA update does not include any changes in these areas. Households in these areas – many of whom have been displaced or their houses destroyed – will still receive mailed instructions from the Bureau instead of hand-delivered instructions. In a statement this month to NPR, the Census Bureau concluded that no TEA changes were necessary in the affected areas, and instead the Bureau will “increase partnership activities and resident education” in these communities.

We’ve added a few items to the HTC 2020 map to supplement the 2010 Mail Return Rates and help census stakeholders understand how likely it will be for households to self-respond to the 2020 Census.

First, for each census tract the HTC map now shows the Census Bureau’s latest “low response score” (LRS). The LRS relies on recent population characteristics in an attempt to predict the share of households in each tract that will not self-respond in 2020. To present this information in a more consistent way with the 2010 mail return rates, we use “100 minus the LRS” to reflect the predicted share of households that will self-respond to the 2020 Census, as highlighted in red at right.

Second, we added a note just below the LRS paragraph to emphasize that neither the 2010 mail return rate nor the LRS “tell the whole story about whether your community will be hard-to-count in 2020. The demographic information below [in the blue  drop-down list] will help give you a more detailed picture of your neighborhood. And be sure to combine your local knowledge of your neighborhood with these data points when you’re planning your Get Out the Count efforts.”  We hope this helps!

Fourth, we revised how census tracts are displayed whose residents are living in group quarters. Unlike household residents, people in group quarters – such as college dorms, health institutions, prisons, or military facilities – are enumerated using several methods separate from the Census Bureau’s mailings or hand-delivery of census instructions.

An observant map user from Nebraska noticed that the HTC 2020 map had displayed some of these group quarters tracts as hard-to-count. We updated the map so that these tracts are no longer highlighted using the HTC orange-to-dark red color scheme. Now the map displays a note showing the latest group quarters population estimate for the tract, such as the tract illustrated below that includes the University of Nebraska-Lincoln.